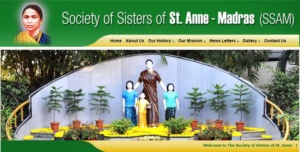 The origin of our Congregation is traced back to 19th Century in the State of Tamilnadu, India. It was founded by Thatipathri Gnanamma, a lay woman. She was an ordinary woman who hailed from Phirangipuram, a small village in Guntur District, Andhra Pradesh. She was given in marriage to Innaiah, the catechist of Phirangipuram. This pious couple were blessed with five sons. Unfortunately, she became a widow at the early age of 37 years. Left all alone with five boys to bring up, she put her entire trust in the divine providence and raised her children strong in the basics of the Christian faith. Four of her sons joined the religious life and one settled down in family life. Freed at last from all family commitments, Gnanamma moved to a village called Kilacheri, 40kms from Chennai and settled down there, although she had no acquaintances there. Thus, the infinite wisdom of God led her step to Kilacheri the cradle, the very Bethlehem of the newCongregation.

During her time, the education of young girls was an impossible dream. Gnanamma kept constantly in touch with the illiterate girls in the locality and identified education as a principal means of empowering them. Fr.Arokianathar, parish priest of Kilacheri, helped her to reflect concretely and go ahead with founding a school for girls in Kiacheri. For the vision to materialize, she started a school exclusively for girls in 1863. Inspired by the committed service to the cause of women, two young girls requested Mother Gnanamma to let them help her in her awesome work and even expressed their desire to do so as nuns. Mother Gnanamma, who was anxious to ensure that her work should continue, accepted their request and sent them to be formed at St.Anne’s Novitiate of the Good Shepherd Congregation in Bellary. After their initial formation, these two became sisters on 04.10.1874 and thus a religious Congregation with a specific vision for the betterment of women known as “Society of Sisters of St.Anne-Madras” was born. Our Congregation was founded out of the pressing need for empowering the women through education. Therefore, it was the mission that demanded the formation of our Congregation.

Our Congregation was raised to the Pontifical status on 6th, December, 1979 by Pope John Paul II. The Generalate is located in Madavaram – Chennai. In 1987, our Congregation was divided into three administrative regional units with separate headquarters in Bangalore, Chennai and Tanjore. These regions were elevated to the status of Provinces in 1999. In 2014, the Congregation was divided into two administrative regional units (North & North East India and Vijayawada regions) with separate headquarters in Kharagpur and Vijayawada: and three Provinces (Bangalore, Chennai and Tanjore) with separate headquarters in Bangalore, Chennai and Tanjore.

At present, the numerical strength of our Congregation is 624 with 126 houses in 38 Dioceses. Our Congregation has spread its wings to Andaman – Nicobar Islands, Jharkhand, Meghalaya and West Bengal to uplift the lives of the tribals there. With the view to extend our mission and reach out to the less privileged, we have established our foundations in Ghana, Italy, Germany, Spain and Australia.

Today, there are a number of challenges that perpetuate sadly the marginalization of certain segments of the population. We, the followers of Gnanamma, address these issues through various specific services.

As our predecessors were true to the vision of our Foundress by opening schools in remote villages to educate girls, we keep the fire of vision alive by rendering services to those we identify as marginalized in the places we are based at. The main apostolate of the Congregation is education and evangelization. Today we have entered into other fields such as medical and social work, social action to meet the needs of the Church today. We have opened health centres, homes for children, widows, the handicapped and the aged as well as social work centres in remote villages and tribal areas to work for their liberation.

We explore new avenues to reach out to the people and evolve new strategies to enhance our involvement with the people. We dare to take up pioneering efforts despite challenges and difficulties. To actualize the dream of our Foundress, we have started colleges even in remote villages with the sole aim of providing higher education for girls, especially the subalterns. Working with the African people through our health centres in their location is one of our recent new ventures. We cross borders, create new boundaries, and take up any mission that serves the poorest of the poor.

An endless journey to end the sufferings of the hapless people

The journey which Gnanamma took in 1874 with just two young professed sisters, has reached the state where we are today. We march on with great vigour reaching out to the people who are on the periphery. We continue to engage in ministries that affirm the original spirit of our Foundress. Today, we are a band of willing hands, committed minds, and compassionate hearts. And we are confident that the strong vibrations of our Foundress will continue to illuminate, guide, protect, preserve, increase, and strengthen us in our journey of religious life and committed mission towards a just and equal society.